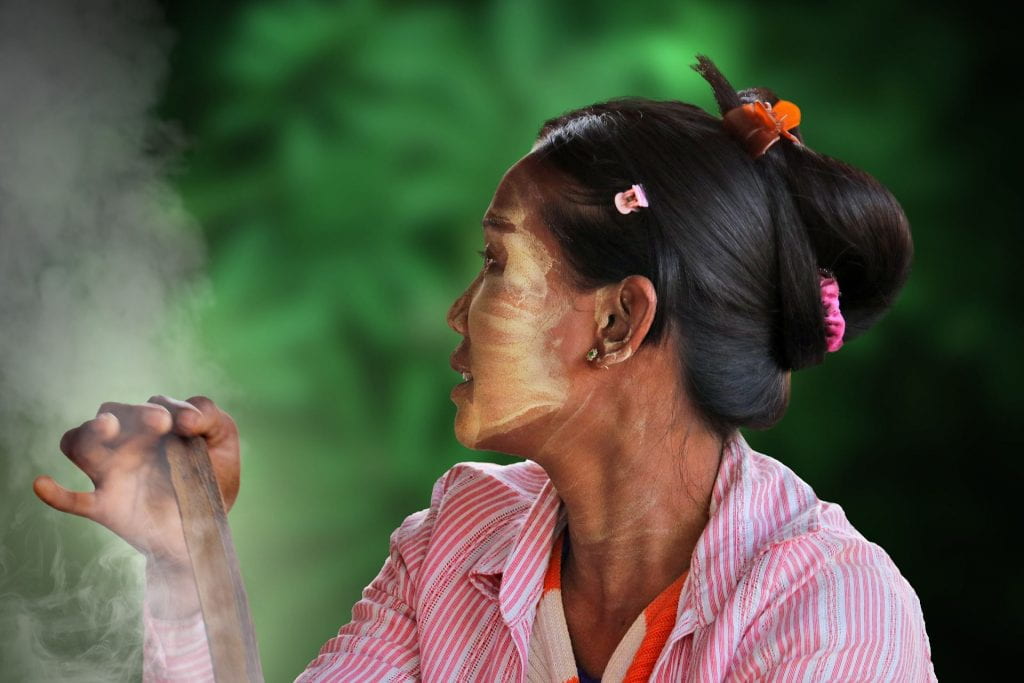 Image by Martine Auvray from Pixabay

Shwepyinan, Taunggyi Maukmae, or Papawaddy?  Which would you choose?  The three are leading brands of thanaka, a traditional skin conditioner used for centuries in Burma (Myanmar).  Thailand shares more than just geopolitics and a 1,000+ mile border with their western neighbor. Routinely I have crossed paths with Burmese people, often curious as to what that “stuff” was on some people’s faces.  Was it sacred, a tradition steeped in purpose and history? Should I avert my gaze?  Though I wanted to know more, something else surely caught my attention and I always forgot to look deeper.  Maybe unconsciously it was my fear that beneath the custom of applying tanaka, there was a dark sanctity.  Possibly a way to protect from the evil spirits that lurked?

At various temples throughout Thailand it is customary to read signage of how best to behave.  One common literal translation reads, “Polite people are welcome.” As if to say, “All you rude people stay away!”  This usually has something to do with how to dress; no shorts, and the importance to just error on the side of respectfulness.  Being a relative newcomer to Thailand, I joyfully take a stance of thoughtful observer.  Observer, not scrutinizer as sometimes my wife’s nudges or, or better yet jabs, replace a need to say, “don’t stare.”  And so I nonchalantly look on in wonder, as I often did when I once again saw a “decorated” face, coated in yellowish tinted patterns.  “There must be a reason for this?” I would reckon.

So, nearly after a year and countless encounters, finally I looked into it and here is what I found.

Not being one to invite skin cancer, I often lather my face in layers of skin cream.  Operating under a philosophy of superlative, the thicker the better.  So much so, that sometimes my only worry is that I might be mistaken for a mime. Scootering around Southern Thailand I grew increasingly more comfortable with my blank canvas of a face. Of course there are not too many oversized Western men dressed as mimes touring the countryside.  Yet, here my coated face seemed to blend in in a way. This was because so many women, and sometimes children and men, were equally smeared.  Theirs a different hue, likely done for beauty, but for many, their utilitarian purpose the same as mine; to protect from the relentless tropical rays.

Traditionally, 35 years is what is considered a mature thanaka tree.  Then it is ready to yield a quality product, often small logs which are sold individually or in small bundles.  However, the process is now hurried, with some trees harvested in as little as 7 years.  Nowadays it is not uncommon to purchase thanaka already in a paste or powder form. Yet, traditionally thanaka was simply bark, wood, or roots that were ground by a person into powder and then mixed with a bit of water. This natural sunscreen a far cry from the -ones, -enes, and -ates plastered to my face; chemicals like oxybenzone, avobenzone, and octisalate.  Thanaka in its pure form also has a fragrance akin to sandalwood, unlike the fake coconut I smell.

Beauty clearly knows no boundaries. As the pervasive consumer culture chomps up thanaka, consumers are as likely as I, to not understand thanaka’s origins, cultural significance or that even that it has been in use for more than seven centuries.  Meanwhile thanaka continues to make an indelible mark as an international cosmetic, however 100% thanaka may not be what is actually purchased. Amazon and Etsy both feature vendors selling thanaka products. The first item I looked, a skin cream at had a laundry list of ingredients; thanaka extract didn’t appear until the 25th ingredient! Again, present were the -ones, -enes, and -ates; dimethicone and glyceryl stearate the two leading ingredients.

As thanaka continues to grow throughout southeast Asia, it is especially prevalent in Thailand and Singapore.  One Thai business, British Dispensary, spent close to six million USD just to market one of their product lines featuring thanaka. Within Burma, the use of thanka varies.  After a victorious Bamar majority junta, thanaka even became a sort of institutional expectation of dress code in schools. Note, this was forced acculturation and rather dark.  If none of this is enough, recently a Yangon-based virtual reality company launched its augmented reality on Facebook, allowing viewers to apply thanaka to their images.  Within a month, over 100,000 faces featured thanaka!

So, there you have it.  Sacred?  Sunscreen? Beauty product?  Shwepyinan, Taunggyi Maukmae, or Papawaddy? The choice is yours.