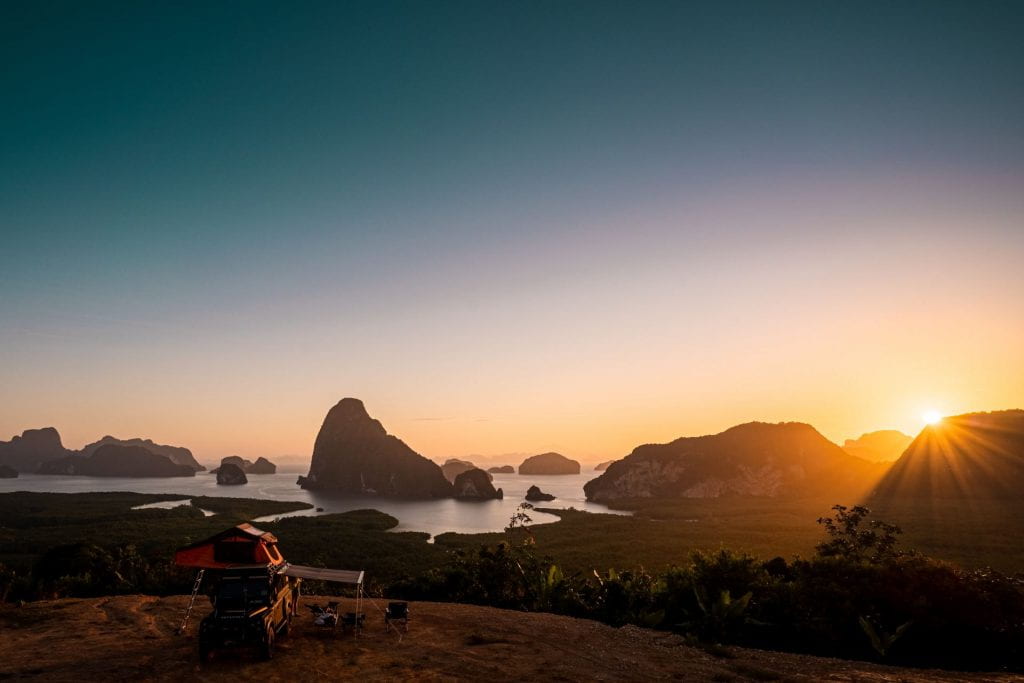 Photo by Artur Kornakov on Unsplash

A troop of monkeys skits across the barren beach.  A few others spy me from above on the branches of trees which attach alongside the precipice of the rock’s face.  Limestone karsts covered in jungle rise hundreds of meters out of translucent waters.  A rock climbers paradise, yet there surprisingly are signs threatening a 1000 baht fine if climbed. From first view, it is easy to see why Phang Nga was declared a protected national park since 2002.  More than 42 islands jut out of the water, their extraordinary shapes examples of erosion.  They too give credence to the name, Phang Nga literally translated from Malay to mean, “heathen, pagan, or primitive people.” The area, 400km2 definitely maintains an allure of “primitive.”

Shade is cast by trees hanging out over the water.  The tide measured in the colors of the rock. The depths below easy to discern as the blues change from light to dark.  Hornbills screech in their distinguishable call, a much higher treble than the apneatic bass sound, a gurgling sound as water is pulled into caverns below and air pushed out. The earth clearly breathing.  Another layer of acoustics  is provided by the cicadas, their intermittent shrill droning, the result of a vibration from a ribbed membrane of their torso. Nature’s soundtrack.

From time to time, small fish hurdle in arcs across the water’s surface; likey evading a predator.  Even lesser pisces appear, but as one large organism.  They jet in tightly knit groups by the thousands.  Rising up, sometimes breaking the tension of the water, are several species of jellyfish.  They suspend themselves as they pulsate forward. Their path buoyant, akin to a butterfly’s effortless float and glide. One species of jellyfish stands out as my favorite, for its beauty, not invasivity. Phyllorhiza punctata, has almost as many names as it does dazzling white crystalline spots. Native to the southwestern Pacific, it is also known as the Australian Spotted Jellyfish, Floating Bell, Brown or even White-spotted Jellyfish.  Approximately 20 inches in diameter, an individual jellyfish is able to filter as much as 13,000 gallons (50,000 liters) of seawater per day.  The downside being, they consume zooplankton, the food necessary for the survival of native species. Not to mention their painful sting.

Entering a cave revealed at low tide, refuse washes up. A message from the sea, as if to say, “humans keep your own waste.”  Numerous plastic bottles make up the flotsam.  Was it the naivety of my youth to think how a bottle in the ocean brought luck and would likely contain a message. Or, are we just polluting our waterways far more today?

Photo by yours truly